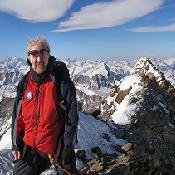 With only three more weeks of this Winter Season left, the snow up high has been great from December onwards. We had our earliest ever Vallée Blanche ski descents, and the final ski tours in Oberland, Gran Paradiso, & the Haute Route have lots of snow. This bodes well for the glacier conditions in Summer, with good snow bridges. The conditions for waterfall ice were mixed this year, but were good until early March. During the season, several clients did some major climbs including Modica Noury, Rebuffat on Tour Ronde, the North Face of the Courtes, and several Winter ascents of the Matterhorn. At the other end of the scale, we saw record numbers on Snowshoeing Weeks and Winter Intro courses, and several groups enjoyed a night in a snowhole! The dates for next years Winter courses are already up on the website.