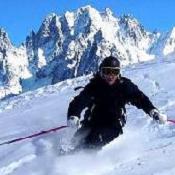 Wow, Sunday was one of the best off piste days of the year. After several days of mixed weather, and another metre of fresh snow up high, it was time for powder. We had three guided groups who took the Midi cable car to ski tour across to Col d’Entreves and then ski the Italian side of the Vallée Blanche. One of the groups ascended on a rising traverse from Helbronner towards the Dent du Geant, and found a virgin powder field for the descent. The guides reported the day as the best skiing all year, and it’s early April! The forecast for the next couple of days isn’t too great in Chamonix, with snow falling down to 700m (below the valley), so for the next few days the ski tourers are heading south to sunny Italy to tour in the Gran Paradiso National Park. The weather looks good there, especially Tuesday and Wednesday, when they hope to make their summit bid for Gran Paradiso 4061m, ascending from the Chabod Hut and skiing down to the Victor Emmanuel Refuge.