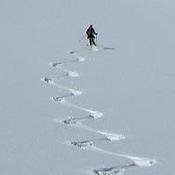 Last week we had two groups ski touring in the Gran Paradiso National Park, and this morning another group has just set off. Snow conditions on the West and North sides of the mountain are great, but to the South and East it is quite dry. Last weeks groups visited the Chabod and Victor Emmanuel refuges in the Valsavaranches, and the Benevolo refuge in the Val de Rhemes. It looks likely that the group this week will follow the same itinerary. Today is the worst weather for the whole week, with snow settling on the ground above 1650m, and already 15cm of fresh snow in the Chabod car park! The aim for the group tomorrow is to skin up to Gran Paradiso 4061m, then enjoy the 1300m descent to the Victor Emmanuel mountain hut for the night. The forecast for Tuesday onwards looks good and increasingly settled in Italy, which is better than in Chamonix today, where it is raining heavily with more rain forecast tomorrow.