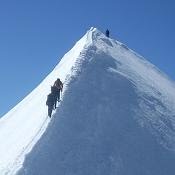 The groups that had been on the Monte Rosa course got back to Chamonix last night having climbed eleven 4000m peaks during the week, and also having spent the night in the Margherita refuge, the highest mountain hut in the Alps. The two groups started in Zermatt and ascended over from Breithorn, Castor and Pollux towards Liskaam and then onto the higher Monte Rosa massif. The weather was perfect, and the only issue that the group encountered was the Naso de Liskaam was quite icy, but the mountain rescue had fitted some anchors on the slope to enable groups to pass over the icy section. Well done to all those on the course for their efforts. You can see the photos of last weeks course at; http://picasaweb.google.com/IcicleUK/MontRosa4000mPeaksCourse