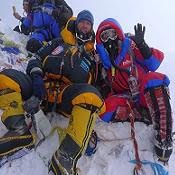 Last year Brad and Sandy joined Icicle in the Alps, and they both climbed the Matterhorn and Mont Blanc during their stay. Less than a year later, here is their summit photo from the top of Mount Everest. The couple were climbing as part of the Australian expedition, and were raising funds and awareness for bowel cancer. The reason for choosing this charity was that Sandy was diagnosed in 2001 and had her whole large intestine removed. A massive congratulations to you both from all at Icicle who you met and guided you in the Alps. You are an inspiration to so many. Read more about the expedition, and the charity at; http://www.everest2010.com.au/index.html.