It’s magnificent. It’s brutal. It’s inspirational. Runners from all around the world descend on Chamonix in the French Alps, for the Ultra Trail du Mont Blanc (UTMB), which describes itself as the global summit of trail running. The UTMB runners follow a course of just over 100 miles around the Mont Blanc, with an eye-watering / lung busting / knee crunching 10,000m of height gain. Yes, it’s the jewel in the trail running world, and a lifetime goal for many, but for those mortals who go to watch, rather than participate, here’s a light hearted list of the faux-pas to look out for! Keep your eyes peeled in the days ahead. You’ve been warned 😉

#10 – Sponsored or not?
You’d rightly think that Salomon has over 2000 fully sponsored athletes entered into UTMB week, clad head to toe in their kit, but forgive yourself if you don’t recognise them all, as 99% are wannabe Kilian Jornet’s hoping that the same kit will give them magical powers and similar talents. Reward yourself with extra points if you see any brand-whore non-sponsored runner wearing other than full Salomon kit.

#9 – M-A-M-I-L fest
Wear whatever suits you best for your trail running, as over 100 miles you’ll have discovered every seam or stitch that could rub, but please please be kind to our eyes in the days preceding your race, and don’t feel the urge to wear your skimpiest lycra for the full week before the UTMB. We know you’re a runner, without you needing to advertise it, in the most anatomically revealing lycra shorts.

#8 – Start line selfies
There’s extra points for unlikely types posing under the start / finish arch of the UTMB, getting their Instagram ‘gold’, especially when they aren’t even participating in any of the races. Don’t be afraid to ask any of these people which race they are participating in, and ask for their autograph. Dreams and goals are important, but delusions like this need to be publicly celebrated with high 5’s and chest bumps if possible.

#7 – Groupie parties
There’s a growing series of unofficial UTMB ‘fringe’ events which seem to attract non-race participants, to gather to obsess about trail running in a very informed manner, generally in a trendy bar with a ‘up and coming’ DJ you’ll never hear of ever again, dropping ‘phat’ tracks. If you spot one, you’ll see people wearing jeans and very shiny trail shoes, talking loudly, and name dropping furiously.

#6 – Social media wording
Keep an eye on #UTMB2018 hashtag, and look out for the following key phrases; ‘the level of psych is high’, or references to ‘race crew squad’, or the fact that they are ‘going to boss the UTMB’. Give yourself an extra 10 points of you spot all three. It’s clearly very important to be motivated for a race such as the UTMB, but surely all this sharing of excess amounts of motivation will help the other runners!

#5 – Registration ready to go
A favourite sight is seeing a runner heading into race registration, which is generally one or two days before their race, fully clothed as if they were heading immediately to the start line. If you spot one of these excited individuals, helpfully inform them that the start of UTMB isn’t until 6pm on the Friday evening. Award yourself extra points if they are using running poles to get to and from race registration.

#4 – Strava overshare
You’ll always catch the not-so-closet Strava wankers, fiddling with their expensive wrist top computers, furiously starting their all time Strava epic as they cross the start line. Look out for the FitBit legends too, as apparently they find it useful to know how many flights of stairs they’ve climbed running around Mont Blanc, or how many calories have been burned. Surely it’s enough for an extra pie or two.

#3 – Obsessed? Me?
At the UTMB, there’s a race village, where official exhibitors have stands to advertise or sell products. Have a look out for obsessed runners frying in the mid day sun, signing up for other races, or buying kit they don’t need, rather than resting and hydrating before their race. Many runners spend several hours in the village-of-obession, weighting their legs, and getting sunburned. Ideal pre-race preparation?

#2 – Taper
Treat yourself to watching people during the week setting off on long training runs to work on their fitness, or to acclimatise. They could simply realise that their training is well done by that stage, and that to sit at the top of a cable car station would be better for acclimatisation, but no, they run. Clap them loudly as they run past, but they probably won’t hear you, as their ear phones will be playing motivational tunes! 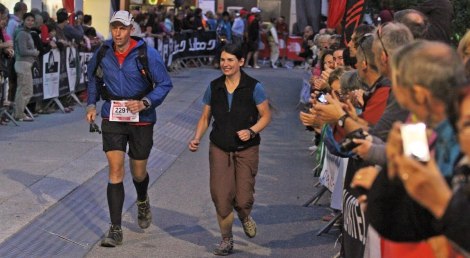 And, with a drumroll please, in first place is…

#1 – New shoes & race t-shirt
We all love a new pair of running shoes, and new clothing, but is starting a 100 mile ultra the best place to wear the official race t-shirt or those brand new shiny running shoes? Probably not, but there’s always a few people who take the branded atmosphere that little too seriously, and feel the urge to wear the race freebies, despite never having worn them for more than 100 metres, let alone 100 miles!

P.S. Dear runners, please don’t take my observations too much to heart. Enjoy your race, and good luck. Don’t get caught making any of the ‘mistakes’ mentioned here. 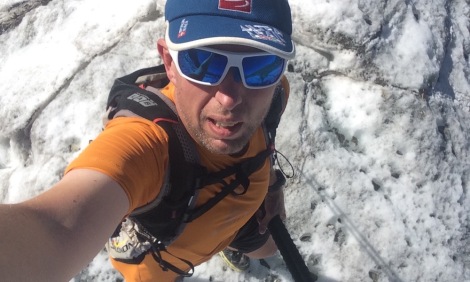 Blog author
This was written by Kingsley Jones, who wrote the award-winning guidebook to trail running in Chamonix (link to Amazon), which features 40 routes including the UTMB race itself. He’s finished the UTMB series races 5 times, so probably needs some help too, and if you catch him doing any of the faux-pas detailed above, make sure you let him know! Kingsley is also the lead trail running guide for Icicle (link).