I don’t often write blog posts about personal mountain challenges, but so many of you asked for details, and sent messages of support, so here it is; my brief race report of the Tor des Geants 2015. The race markets itself as the toughest and longest mountain trail race in the world, with 330km (205 miles) distance and 24,000m of height gain. This equates to the distance from London to Leeds, with the height gain of well over 6 ascents of Everest from base camp. It makes a circuit of the whole Italian Val d’Aosta, starting and ending in Courmayeur, and passing through the Gran Paradiso, Monte Rosa and Matterhorn massifs, before returning to the Mont Blanc massif and Courmayeur. The event has been on my radar for years, and this year was the 6th edition of the event. I knew that the Alpine guiding season would be perfect preparation for it, in terms of mountain specific training. 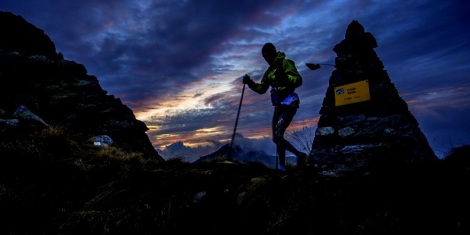 The weather throughout can politely only be described as challenging, with fresh snow and ice on all the passes above 2600m. There are 25 cols to negotiate on the race, with the highest being the Col Lauson 3299m. On the second morning, the race was suspended for a few hours, to allow snow to soften sufficiently to make it safer, but the weather took its toll on the runners with around 150 out of 800 starters dropping out on this section. Unlike many long distance runs such as the Marathon des Sables, which are operated as stage races, the Tor has 7 ‘lifebases’ where you can change kit, eat and rest for a couple of hours, but how you elect to run or stop is completely up to you as an individual. Most people opted to run for about 20 hours to the next ‘lifebase’, then sleep for 2 hours, eat and depart again.

As the days and nights passed, I was steadily working my way up the field, and was in the top fifth (and 3rd Brit) of all runners. As we passed through Gressoney, we heard of worsening weather forecasts, but now the last 100km of the race were approaching, onwards I pushed. At the village of Saint-Jacques in the Champoluc valley, we were stopped at the checkpoint, and told that the race was suspended again due to apocalyptic weather forecasts. A snatched few hours of sleep, were ended when race officials told us that the final section of the race had been cancelled for safety fears. We were transported back to Courmayeur, and informed that all runners who had made it to Gressoney before the time cut off would be declared official finishers. It was a bitter sweet pill to stomach, as mentally we were all geared to push onwards.

The following day saw us parading through the streets of Courmayeur, to cross the finish line, and to be awarded our prized finisher jacket. Whilst I was distraught at the time not to have had the opportunity to complete the loop I had dreamed of for so long, the organisers made completely the right safety decision to allow us as far as we did (at that stage 222.5km completed), before the risks became too great. I knew I was a stubborn git well before this race, but discovered that there is even more to be tapped into! The experience was absolutely inspirational, the region is breathtakingly beautiful, and the support of the locals absolutely made it for me.

I may have a Tor des Geants finisher top, and believe me it was hard earned, but this race still is unfinished business, and I will return to run across the line in Courmayeur. We’ll see how the ballot turns out for 2016…

Thanks again for all your messages. Kingsley

One response to “Tor des Geants”